How many Londoners are walking?

It is a bold ambition of the Mayor of London that Londoners will participate in at least 20 minutes of active travel every day.

As part of National Walking Month, we take a look at recent Active Lives data to see just how many Londoners are regularly walking, and how walking can play a role in the mayor’s vision.

The positive news is that that two thirds (66.3%) of Londoners are walking for leisure whilst more than three quarters of the capital (76.7%) are walking as a means of transport.

In fact, London has recorded the highest percentage of people walking for travel when compared to other major cities in England including Greater Manchester (60.1%) and Birmingham (63.9%).

However, the data is less favourable when comparing the capital’s participation in walking for leisure with London sitting below Manchester (69.7%), Nottingham (67.4%) and Birmingham (66.6%). 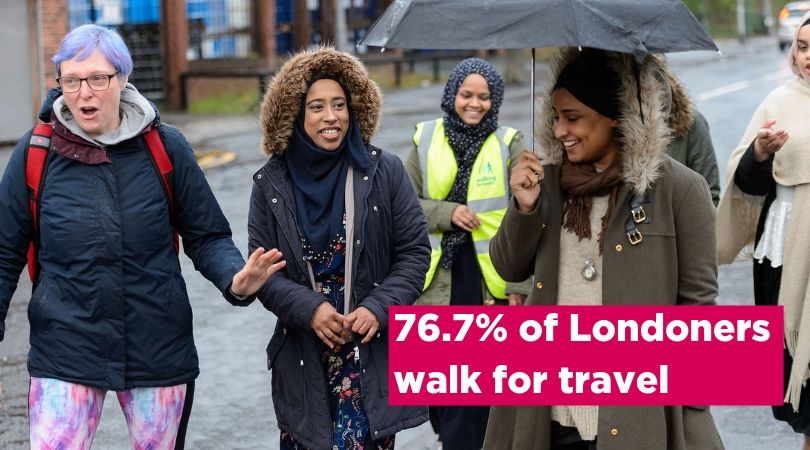 London’s participation in walking for leisure then is not as high as some other cities, and the national average, but walking remains significantly more popular than other common leisure activities.

For example, 37.7% of Londoners regularly got out on their bike in the last year while running was only popular with 35.8% of the capital.

Clearly walking remains one of the most popular forms of activity, likely to be due to its accessibility.

With Londoners eager to get out and about, Living Streets asked thousands of people in the UK’s biggest cities how walker friendly their city is.

Their research found that more than half (57%) of people feel safe walking around London and that nearly three quarters (72%) of those surveyed think London has a good quality streets.

London’s results were positive overall and put them in third place for walkability in the UK, falling just behind Scotland’s capital Edinburgh and Sheffield. 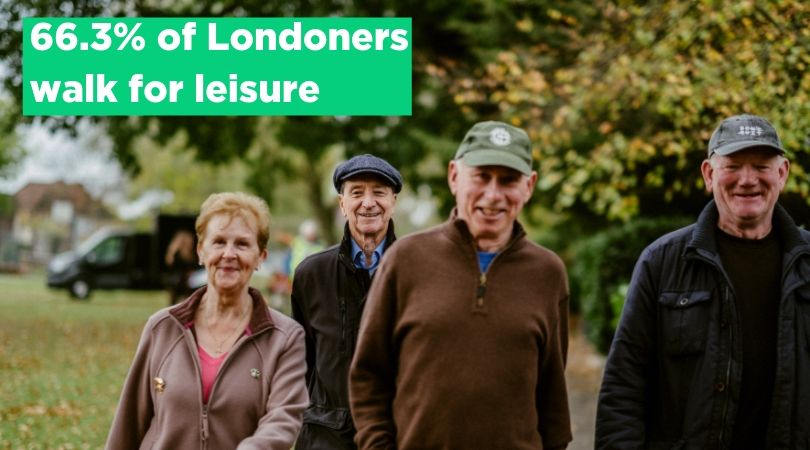 The Mayor of London’s Transport Strategy, which was published back in 2018, sets out the Mayor’s policies and proposals to continue to reshape transport in London over the next two decades.

One part of the strategy outlines that by 2041 the Mayor aims to get all Londoners to do at least 20 minutes of active travel every day to help them stay healthy.

A large aspect of this mission will involve making it easier for people to both walk and cycle across the capital.

Several proposals to make this possible are made in the strategy such as design, so that there are nice places for people to walk, cycle, use public transport and to spend time, and ensuring streets will be easier for disabled people to use.

Part of this will mean ensuring pavements are wider and have less things that could get in the way of wheelchair users as well as making crossings more convenient for pedestrians.

In the past year, London Sport's Digital Walking Pilots have seen 4,123 older women register for support to get more active; 71% of these women were classed as less active prior to participation.

For more information on London Sport's work in this area contact chris.norfield@londonsport.org

​The Minister for Sport and Civil Society, Mims Davies MP, and Sport England Chief Executive, Tim Hollingsworth, this morning renewed calls to drive a digital revolution across the physical activity and sport sector

London is rich with open spaces, 47% of the city is green space and there are over 3000 parks, which means you’re almost never far away from somewhere to be active.

How tech innovation is encouraging more Londoners to get walking

Over the past two years, London Sport’s technology programme, Sport Tech Hub, has championed many innovative start-ups that use technology to encourage London’s citizens to have active lives. Here’s three examples of Sport Tech Hub start-ups that have concentrated on walking and why they’re successful according to our Specialist Advisor for Technology for Participation Alex Zurita.

Volunteering – good for sport, good for the individual

​In Britain, we all know that sport relies on volunteers for it to run week in week out. We wouldn’t have the proud sporting infrastructure we have without the millions of hours people have willingly given over the years. However, the value of volunteering is not only to sport organisation, but importantly to the individual themselves.