We are delighted to confirm that Tove Okunniwa, Chief Executive of London Sport, has been appointed to the Board of Sport England by the Department for Digital, Culture, Media and Sport (DCMS). Tove will continue to serve as London Sport Chief Executive as normal following her appointment.

Tove, who has led London Sport since September 2017, joins the Sport England Board having previously served as a Board Member and Deputy Chair at England Boxing. Prior to joining London Sport, she had served as an independent consultant advising clients on commercial and marketing strategies, before which she held senior leadership roles in global consultancies Havas and MEC Access and with the BBC.

During Tove’s tenure with London Sport to-date, the organisation has made a number of significant strides towards its aim of making London the most physically active city in the world, including the launch of its technology incubator programme, Sport Tech Hub, its announcement as a Founding City Member of the global Active Citizens Worldwide initiative, and the publication of research that demonstrates that ever £1 invested in physical activity and sport in London generates social value of at least £1.48.

Tove’s appointment to the Sport England Board comes shortly after new appointments to London Sport’s own Board, including the announcement of a new Chair of London Sport in digital transformation expert Jillian Moore.

For more information on Sport England’s Board appointments, click here.

Prior to publication, it must be approved by London Sport Media Centre. 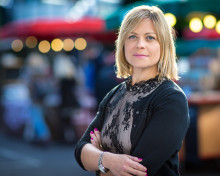